We’re proud to introduce La Demoiselle d’Haut-Peyrat 2015 to the United States for the first time! The wine is vinified in stainless steel vats with hot and cold temperature control, before undergoing malolactic fermentation as it ages in oak barrels 12-18 months. Sustained by well-rounded tannins, it’s an elegant left-bank Bordeaux with notes of blackberry, currant, and licorice. View the wine. 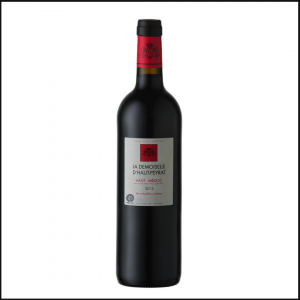 In the late 18th century, Château Peyrat-Fourthon was a well-known hunting lodge. The mayor of 1834 was the first to bring grape cultivation to the estate, and in 1998 when Hervé Godin acquired the Château, the cellar was renovated to support modern winemaking techniques. 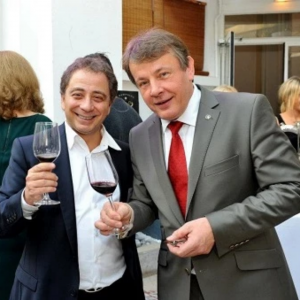 Winemaker Pierre Narboni with the President of the Sommeliers Association of Paris, Jean-Luc Jamrozik

Since June 2004, owner Pierre Narboni has grown the vineyards from 12 to 20 hectares and it has quickly proven to be one of the most advanced vineyards in the Haut-Médoc. The Château became Cru Bourgeois Superior in the 2020 classification of Crus Bourgeois du Médoc.

The wines are beloved by top sommeliers and the estate is heavily involved with a sommelier club, including the best sommelier of the world. Narboni’s influence has brought refinement to the wines and led to the creation of La Demoiselle de Haut-Peyrat, a kosher certified fine wine produced under rabbinical supervision.

Pierre Narboni set out to improve the quality of kosher wines coming from the Médoc. The wine is strictly produced under the control of the Beth Din of Paris to ensure a wholly kosher product. The technical advice of the cellar master and owner is followed throughout the winemaking process, resulting in a high-quality wine.

Certified kosher by the Beth Din of Paris, produced with strict criteria from harvest to bottling.